Object-Oriented Programming is easy when you understand the basis on how objects talk to each other to solve a given task.

A class work with an object instance although there are static methods and properties in which we could access inside a class directly without using an instance of the class to access then. Even  the easiest way to distinguish static from instance methods is that they are accessible through the class name that they belong to. If you start typing a class name into Visual Studio, Intellisense will show you what static methods and properties are available to the type itself:

More about the static accessibility here :
Instance members can only reference the class object why static members are not accessible outside their class code block. 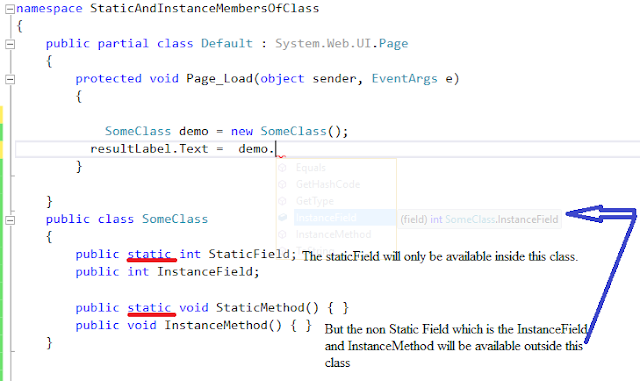 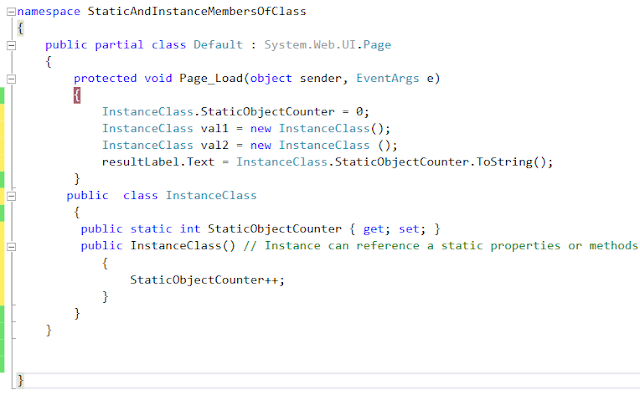 Save and Run: and the result would be 2. Since we declared two objects val1 and val2.

Keys to remember about class

Understanding how a class works with an object


What Car code block does

Class Car is declared just like how any method could be declared and inside its code block we have Class-level Properties such as: Make, Model, Year and Color which we can treat like variables from procedural programming, except it prefix accessibility named "public" and its post-fix get; and set; which means read/write attributes that makes this variable distinct and therefore we refer to them as properties in OOP.
Meanwhile, inside the default class, it is possible to access those properties with the help of the class object instance since the class shares the same namespace with the default class.


The Object Instance stores in Memory

Each individual values is stored in sections of memory, and another section of memory hold onto myNewCar as a reference to these memory sections and their values:


This is exactly how our values are stored in memory and now that we have it in memory we can also retrieve then back from memory whenever we need those values, just like retrieving values from variables.

Now let us modify this class and use its values : Here I will create a very simple application that will select a car from the car lot and displace it, the good thing about it is that if a user spin and get 3 white cars then the user will have access to those 3 cars with just $1000.00  meanwhile each car cost $2000 which should be $6000 in total. 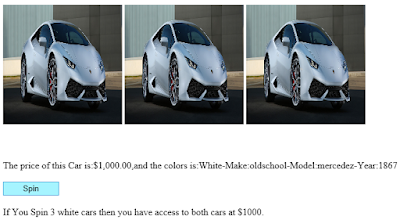 Of course it's a good idea to put a new object into is valid state as soon as possible before you start accessing it normally at the time of instantiation. This would mean that you would want to construct the values for those fields – that represent that state – somewhere on the line of code where the new keyword is used. fortunately, there is a special method for us to do this and this method is called a Constructor.

Car myNewCar = new Car ("oldschool", "Mercedez" , 1867, "White")
In this case we are populating our Constructor with the values from our Car class-level properties, or simply put this way that we passed in the values that belong to the Car class-level properties as an input parameter at instatiation.
Obviously Constructor is created whenever we create a new Object , that means we have called on the default , empty constructor by using the empty parentheses:


3 differences between Normal Method and Constructor:

To get the code-snippet shortcut for a constructor, type "ctor" and hit the tab key twice.
In this regards, we can take control of what the Constructor does by explicitly writing its implementation details.
Sample Code that will print out our values just like the above code did but this time around we just output our values to examine how to use the constructor within the class level  in a less twisted way:

Store procedure has some similarities with views in the sense that it allows encapsulation. i.e. to retrieve for further, later use a series...